It’s hard to distinguish a seasoned professional bettor in the midst of a group of travel salesmen in Las Vegas for the weekend looking to bet the “ponies”. If you ever find yourself in such a predicament, remember, follow the information and you might just end up on the same side as some of the most successful bettors in the business. Now, just in case a travel salesman stumbles by looking to impress his friends on their work holiday, here’s a comprehensive horse betting guide that should help to demystify the world of horse betting. A good betting strategy is always helpful.

How to bet on horse racing

Horse racing is a bit of fringe market when considered alongside the other more popular betting markets in North America. While the Triple Crown is a marquee event (and it’s Canadian equivalent!), you might have found yourself haphazardly making a punt on a three-team parlay on an NFL weekend. In the following section, we’ll run through all of the various types of bets on offer.

In terms of frequency, most horse racing bets are straightforward “win” bets. Like any bet, you’re picking a single runner from the field to finish first. While it might seem an obvious bet, it’s hotly debated whether or not this strategy is most optimal for bettors looking for long term success.
Each-way betting is a specialized bet where bettors earn a return if their selected runner finishes second or third in races that feature eight or more competitors. You’ll also find that in handicap races of 16 or more runners, bookmakers will payout winnings to bettors whose runners finish in the top 4. It’s common to find bookmakers offering enhanced odds for selected races and payout winnings all the way down to the fifth place runner.
Returns are generally calculated at one fifth of the odds in non-handicapped races and a quarter of the odds in handicapped races.

It’s not unheard of to hear about bettors winning large sums of money in horse racing while only risking a small stake in a betting style that resembles conventional parlays. In Horse racing, the multiple or accumulator can range from anything as simple as a two-horse bet to seven or eight hours accumulators. Like a parlay, the logic follows that if even one of your selections fails to earn a result the entire accumulator is void.

Outside of accumulators, there is a wide variety of special bets that allow you to link horses together in doubles, triples, and accumulators. It’s a wild ride and takes a lot of consideration and a strong stomach. Here’s a few examples:

Growing steadily in popularity, betting exchanges provide experienced bettors with a platform to assume some risk but profit from their losing bets. In sum, bettors take on the role of bookmakers thereby laying horses that they do not believe will win. This type of betting requires that bettors have sufficient funds in their account to cover any losses incurred. As its difficulty indicates, this type of betting should only be considered after a careful analysis of the method and keen understanding of the risks associated.

Odds of winning in all horses racing are returned as starting prices (more commonly referred to as SP). This in effect allows a bettor to select a horse at the opening odds in the hope of getting a better price. It’s common for bookmakers to now offer a best odds guaranteed to bettors thereby securing the best price regardless of what the initial offering was. In the case of ante-post betting, you risk losing your entire stake if the horse does not run at all, however, if the race is marked “non-runner – no bet” the stake will be returned.

Picking a winner is a complex and information sensitive affair, especially when evaluating the Canadian market. In the following section, you’ll find a detailed guide of some of the key factors that influence the outcome of any horse race.

Racecourses in Canada, like the ones in the United States, vary depending on the extensive differences in climate and conditions that affect that track and horses entered. This makes Canadian horse racing widely appealing to bettors because of the multitude of experiences on offer. You can a detailed breakdown of the many venues on offer in Canada here.

As mentioned above, because of the difference in track condition, the going is an important factor to consider when making bets on races in Canada. This is particularly important when considering the extremes of going that can be found across the racing surfaces in Canada. For example, some horses perform better in racing ground that is soft or heavy. Synthetic surfaces are also the norm in Canada and can be difficult for bettors more familiar with European markets. Insights like these should be considered before making selections.

Distances in races are judged on a variety of factors, especially when considering flat racing surfaces. In Canada, a length if 1 mile (1.6 KM) is referred to as a “common mile”. Most races are usually 1.25 miles (2 KM) and are colloquially referred to as a “classic” mile. This is important because breeds of horses and specific entrants perform better at certain distances. A powerful stride or highly regarded stamina are only assets if the length of the races is considered.

Like most sports, there exists a select few in horse racing that attract bettors and are generally considered to be good punts when all else evens out. In Canada, the legendary Roger Laurin is a Woodbine regular and Mark E. Casse is training jockeys to success in the American edition of the Triple Crown. Thankfully, there exists a multitude of statistics and race records that keen bettors can use to make informed bets.

Jockeys, like your favorite golfer or boxer, tend to attract a lot of attention and are a considered a safe bet for most casuals. Whether it’s Canadian legend Patrick Husband or current Woodbine star Luis Contreras, most jockeys are considered to be high calibre athletes. however, the variance on their success suggests that bettors should focus on the horse.

Get started and place a bet

A key point of consideration for bettors is the type of horse race on offer. Flat racing is the most popular type of horse racing in Canada. It leads the way at all major racetracks in the country and is a main feature of the Canadian Triple Crown.

Maiden races are typically where trainers break in horses that haven’t won a race yet. Generally, a hard field to call, the lack of information and a number of variables dependant on the region make maiden racing a difficult proposition for bettors.
While difficult to bet, maiden races do present an opportunity to begin grassroot research for potential winners in bigger competitions to come. Analyze racetrack video and combing over statistics may open up the possibility for profitable spot-betting when an opportunity arises.

It’s common to find horses weighted differently when bookmakers set the odds for any specific race. A handicapped race is one where all the horses competing are weighted to have an equal chance of winning. A rating system is developed on the form of each horse from their prior races and factored into their competition score. The difference in rating is then translated into a score that judges the speed of the horse and their level of superiority.

Incredibly difficult to predict, flat handicaps are still some of the most popular markets for bettors to explore and the lure of great odds helps to push continued engagement.

Another way of categorizing competing horses, group races are used to establish a baseline of competition when controlled for level weights or weight-for-age. There are three classes of grouping: Group 1, Group 2, and Group 3. They are ranked in terms of competition level. An example of Group 1 flat race in Canada would be the Queen’s Plate at Woodbine racetrack.

There are three marquee races in Canada, collectively titled the Canadian Triple Crown:

In terms of marquee events, The Queen’s Plate is the most substantial race with a prize total of $1 Million (Canadian) on offer to the race winner. In total, the comprised pot of the Canadian Triple Crown is $2 Million (Canadian). The first and the third leg take place at Woodbine Racetrack in Toronto, Ontario, Canada. The middle leg takes place at Fort Erie Racetrack in Fort Erie, Ontario Canada.

As Summer turns to fall, other marquee events held in Canada include the Canadian International Stakes, the Woodbine Mile, and the E.P. Taylor Stakes. All of the events are held at the Woodbine racetrack.

Thoroughbred horses are the lifeblood of horse racing and their lineage can be traced back to one of three stallions: Darley Arabian, Godolphin Arabian, and the Byerly Turk. Initially brought to England in the midst of increased trade to the Middle East and Asia, today’s thoroughbreds are a distinct bloodline with English and European origins.

Canadian horse racing can be traced directly back to the UK and the settlers that first came to what was then known as Upper Canada and the Thirteen Colonies that would eventually become the United States. The Queen’s Plate, introduced in 1860, was an attempt to improve the breeding stock available within Canada. Boasting a sizeable purse, with royal prestige, breeders were encouraged to travel with quality horses to Canada from Great Britain and the United States. The Plate is named after Queen Victoria, who granted a prize of 50 guineas.

In recent times, the Canadian horse racing industry has fallen on hard times and became heavily dependent on slot machine gambling introduced on their premises to boost revenue. The slot machines were removed from racetracks in 2012 without a warning from the provincial government and severely cut into the profits at a tough time for the industry.
A recent boom in successful Canadian trainers hopefully signals to an improving and new chapter for the horse racing industry in Canada. 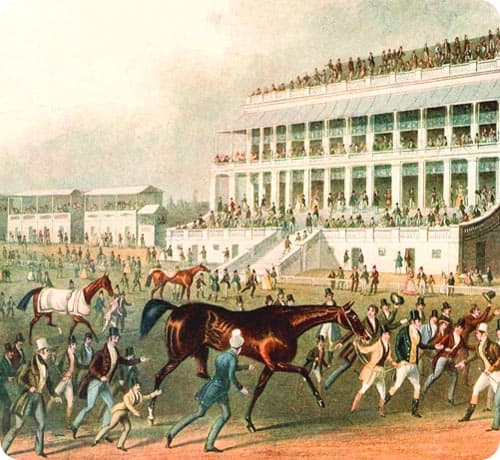 This comprehensive guide to Canadian horse racing will hopefully be a resource for new bettors looking to boosting their gaming with horse betting markets available in Canada.
Betting on horse races is detailed and vigorous activity with a lot to offer and a great way to express yourself through diligent research, careful analysis, and informed bets. The key things are to familiarize yourself with the types of races on offer, get a feel of where you’re earning the best returns and work towards finding a niche to specialize in. In the midst of all this, you might forget that you initially got into for the winnings!