Major League Baseball is the leading professional baseball league in the United States. It comprises 30 teams across the US that are broken up into two leagues: the National League and the American League. 15 teams compete in each league, although they are divided further into divisions of five based on location, West, Central, and East. Each MLB club plays 162 games over a course of a season in the bid to qualify for the playoffs. Only five teams from each league qualify for the post-season. The two sides that have the best records in their respective league also join all three division winners to advance to the playoffs, known as the wildcards.

The wildcards play in a straight-shootout in the Wildcard Round to reach the Divisional Series, joining the three division winners. Only one team apiece advances from both the National League and the American League after playing in the Divisional Series and the Championship Series. The respective winners from the NL and AL then play for the championship, known as the World Series, in a best-of-seven contest that is played in the home venues of both teams over alternate games.

The New York Yankees are the most successful franchise in MLB history, having won the World Series 27 times, although the last of their crowns came in the 2009 season. When considering a bet with Mr Green, the Yankees are always in consideration, even if their name has been worth more than their performances of late. In the modern era, the balance of power has shifted away from New York towards the Boston Red Sox, who, after ending the ‘Curse of the Bambino’ in 2004, have won more titles than any other franchise.

The Los Angeles Dodgers and Houston Astros are also outstanding teams that have won the crown in recent seasons and always seem in contention. In the 2021 MLB campaign, the Atlanta Braves found their form to end a 26-year drought without the World Series by beating the Astros.

There is no shortage of quality outfits in the MLB, therefore, you can look at the baseball odds for the 2022 World Series and begin your sports journey with up to 200 dollars in free bets to guess which team will walk away with the title.

Baseball is blessed with several star players that have excelled at the plate or on the mound. The best pitchers in the game include the Yankees’ Gerrit Cole, San Diego Padres’ Yu Darvish and Los Angeles Dodgers’ Trevor Bauer. The leading batters in the game include the Dodgers’ Mookie Betts, the Los Angeles Angels’ Mike Trout and the Washington Nationals’ Juan Soto. The MLB has stars on almost every roster, but these players stick out more than most. Watch out for their performances when considering a bet on the MLB.

How to bet on MLB?

The first step to betting on MLB is to know what you’re doing when placing a wager. It’s vital that you find the right market, so when you access the Mr Green sportsbook or app, you need to enter the baseball section before finding MLB. During the regular season, there will be a raft of games available to wager on almost every night.

The MLB season runs from the beginning of April up until the end of October when the World Series concludes. During that period, all 30 teams will play 162 games, and those involved in the playoffs can play almost 180. Therefore, there are an ample amount of games to bet on. There are also outright markets to wager on, such as the World Series winner, AL winner, NL winner, AL MVP, NL MVP and the Cy Young Award.

To bet on the MLB, you simply have to click and tap the market you wish to wager on with the relevant odds and enter your stake. If your wager is successful, it will automatically transfer your winnings into your betting account. Before betting on the MLB there are certain strategic aspects you should consider. If you’re betting on a game, you must consider the form of the team and players you’re betting on.

MLB line-ups change every night as clubs rotate their starting pitcher to preserve their star men throughout the campaign. Therefore, you need to pay attention to which pitcher is starting and their statistics. One pitcher might be an All-Star, but his replacement in the rotation might be an inferior player.

The form of batters is also worth consideration. If a player or players are on a cold streak, you may wish to stay away from their side. There are little nuances in the game of baseball, and knowing the minute differences can make or break a successful bet.

Types of odds on MLB

There are several types of bets for wagering on MLB. We will now break down the odds available for you to wager on the MLB:

On this bet, you bet on the team you believe will win the game. You will see two values for the two sides in the game, they are represented either as a fraction, whole number or a decimal. For example, the New York Yankees may have a value of +500 in their game against the Boston Red Sox, who have a value of -500.

In this example, the Red Sox are the favourites in the contest and a $1 bet would yield only a profit of $.20. However, a $1 bet on the Yankees at +500 would yield a profit of $5. it’s difficult to find value on the money line, therefore, you may have to put down larger stakes to secure larger profits.

On this wager, you bet on whether the teams will beat the run line or cover the run line. Both teams in an MLB game are given a numerical value based on their past performances. The team with the negative number is the favourite for the game and the team with the positive number is the underdog. For the underdog, they need to either win the game or lose by less than their numerical value to cover the spread. If the other team wins by more than their numerical, then they will beat the spread.

Let’s look at an example – the Red Sox are given a value of -2.5 and the Yankees +2.5. For a bet on the Red Sox to win, Boston would need to beat the Yankees by three runs or more. For a bet on the Yankees to win, New York would have to either win or lose by less than three runs. The run line is a good way of finding value between sides that have great discrepancies in talent, although the odds on a single game can be quite low. Therefore, you will need a large stake to secure a profit.

Why bet with Mr Green?

Here at Mr Green we offer the best value odds on MLB, whether it comes to betting on regular-season games or the World Series. We provide a diverse range of betting markets for the MLB to cover all of your wagering requirements.

We provide top value on the moneyline, runline, overs and unders and player prop bets throughout the campaign. Even in the off-season, we have you covered with our detailed list of outright markets that are updated to reflect the tone of roster transactions.

Mr Green offers a compelling welcome bonus by signing up to our betting sites, providing two free bets worth $25 to use on the MLB, along with other major US sports. By using our MLB guide, you may be on the path of turning those free bets into a significant win on our wagering markets. 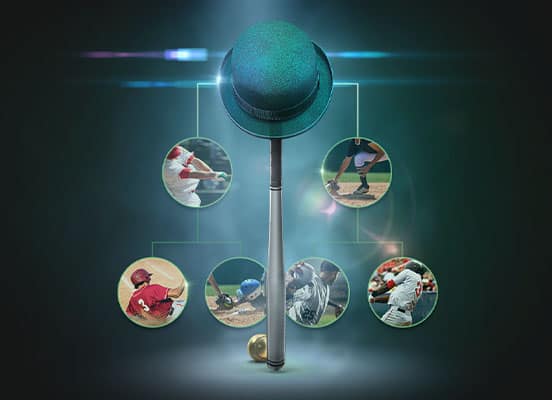 When does the MLB World Series start?

What were the MLB standings for 2021?

The Atlanta Braves and the Houston Astros were the outstanding teams in the MLB in the 2021 season, winning the National League and American League, respectively. The Braves toppled the Astros in the World Series by a 4-2 margin to win the title for the first time since 1995.

What is the best strategy when betting on baseball?

Research is vital for betting on baseball. Carrying out thorough background reading on the teams and players regarding form and availability will arm you with the data required to be successful. Choose markets carefully, marrying your research with the odds that provide the best value.

How do odds on betting on baseball work?

You will receive odds for betting on the money line, run line and total runs among other markets, including player and team props. Odds distinguish the value of your wager and are represented as either a fraction, decimal or a whole number.