How to play Hook's Heroes

The music is light and cheerful, with a Caribbean sound that’s perfectly fitting for a pirate adventure through tropical seas. Hook’s Heroes’ design is very unique, with a moving background that brings back memories of pop-up books you would read as a child. The symbols include the classic 10 – A with high paying symbols being represented by the five fun pirate characters. There’s a Wild and Scatter thrown in for good measure, with the Scatter awarding entry into the feature round.

You can play Hook’s Heroes for free with play credits, or play with real cash, and set your wager as low as €0.20 all the way up to €200. 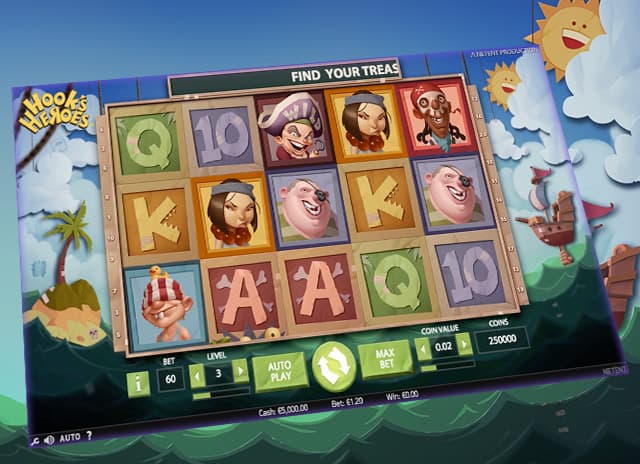 Hook’s Heroes features a Wild symbol, represented by the fearsome Captain Hook, who links up winning combinations with a grin on his face. The Wild symbol substitutes all other symbols except the scatter.

You can’t miss the Scatter symbol, which is represented by Peter Pan in a crocodile costume. The Scatter is what really makes Hook’s Heroes and exciting game, if you get 2 Scatters you are awarded a free Feature Spin, being a re-spin with a randomly chosen feature for potentially bigger wins.

When 3 Scatter symbols appear anywhere on the reels you get to choose between three different free spin features – Fairy Feature, Mermaid Feature and the Pirate Feature. Each one has different amounts of free spins, but all of them are sure to be both exciting as well as rewarding.

As you make your choice the background scene changes to illustrate the feature. When you get 4 or 5 Scatter symbols, you are awarded 2 or 3 free spin picks, meaning that once the first round is finished you get to pick a feature again and it can even be the same feature as you just played.

If you only hit 2 Scatters, then worry not, Hook’s Heroes will still award you with one random feature spin from the three options. Now, who said pirates were mean? 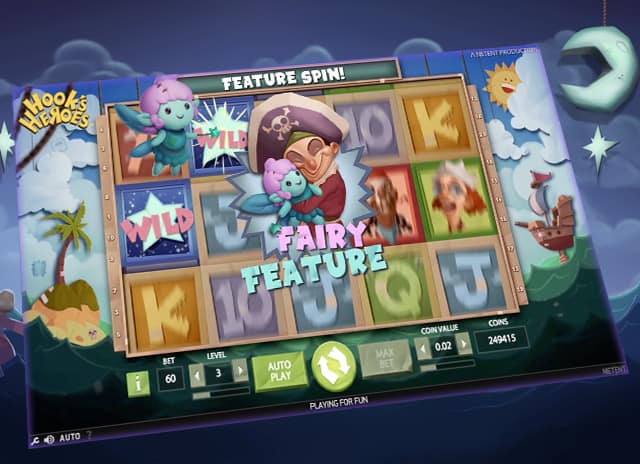 The Scatter symbol is your ticket to the buried treasure, when three or more Scatters land anywhere on the reels, you get to choose between three different free spin features that have their own special perks.

There are three different sets of free spins to choose from:

Fairy Feature
The Fairy Feature awards 7 free spins, with random wilds. Each spin will be visited by a fairy and given between 2 and 5 overlay Wilds placed on the reels in random positions.

Feature Spin
When 2 Scatter symbols appear anywhere on the reels you are awarded 1 free Feature Spin with a randomly chosen feature. Basically this is a re-spin that has been given one of the three features of the free spins.

Hook’s Heroes was released in September 2015 and was created by NetEnt. The game is available in ‘play for free’ mode or ‘real money play’ across desktop, tablet, mobile and app platforms.

Hook’s Heroes has plenty to keep you on the edge of your seat, with three exciting features and Feature Spins that hit quite often when you get just two Scatters. It feels like there’s always something happening, and there’s plenty of wins to be had.

Feature-wise, the Pirate Feature tends to have the lowest payout, with the Mermaid Feature having the potential for some big wins due to the 4x Wild win multiplier. We like Hook’s Heroes’ colourful and playful design and soundtrack – it’s a must-play slot!