The first thing to do is to choose your stake, from €0.01 to €0.50, followed by the number of coins you want to wager per payline, which can be anywhere from 1 to 10. This means that the range of betting is €0.25 to €125 per spin. Once you’re satisfied with your bet, click on Spin to start. You also have the option of using Autoplay, which you can set up to 100 spins automatically.

Pragmatic Play has invested a lot of time into the slot’s look and feel, with the reels lying under the starry and moonlit skies. A North American setting always set the scene for majestic and beautiful creatures. In that respect, it is similar to a number of other online slots, such as Buffalo King and Eagles' Flight. And so Wolf Gold joins this roster of respected titles featuring American animals like bald eagles, cougars, and buffalo.

Aside from the Wild and the Scatter, the high-paying symbols are the mountain lion, the horse, and the eagle. The lower-paying symbols are represented by the traditional playing card symbols of J, Q, K, and A. There are also three fantastic jackpots lying above the reels: the Minor, Major, and Mega. 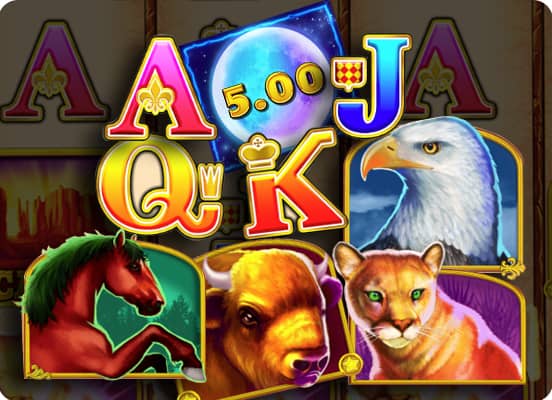 The Wild is represented by none other than the wolf. It can substitute for any other symbol except for the Money Symbols and the Scatter. The canyon Scatter symbol can help activate the Free Spins bonus if you land at least three on the reels. 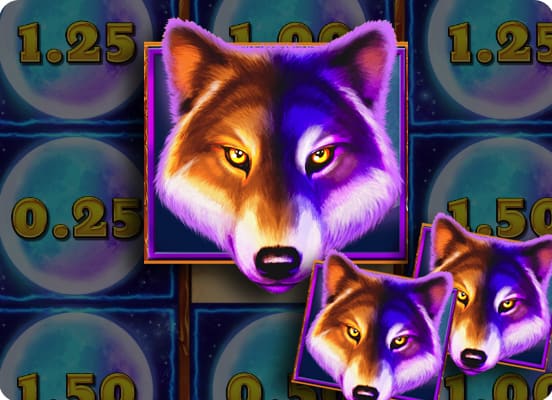 While it isn’t unusual for a modern online slot to be packed full of bonus rounds, Wolf Gold does a nice job with its three bonus features available.

Land at least three Scatters simultaneously and you’ll activate the Free Spins bonus, which will reward you with five Free Spins. It doesn’t stop there, as the centre reels (reels 2, 3, and 4) spin as one Giant Symbol that covers each of the three central reels.

You can also reactivate the Free Spins feature with an additional three spins offered each time you hit at least three Scatters. In fact, there’s no limit on the number of extra spins you can win.

The Money Symbol is represented by the Moon, which can land on any reel. When you hit at least six shimmering full moons, the Money Respin feature is activated. The remaining symbols are then removed from the reels, leaving only the Money Symbols. You’re credited with 3 respins to start with, with each additional Money Symbol on the reels remaining in position for the remainder of the round. Each time you land an additional Money Symbol, the number of Free Spins is reset to 3. The round is considered complete when all respins have been completed or each position on the screen has been occupied by a Money Symbol.

Each Money Symbol comes with random multiplier values that are taken from a predefined set of numbers. Alternatively, it can show the Mini or Major jackpot values, which depend on your stake. At the end of the Money Respin feature, when no more moons have landed, all stake multipliers in the moons are added together. So even when you don’t win the jackpot you still have the chance to win a nice bonus.

If each of the 154 positions has been filled by moons, you win the Mega Jackpot of 125,000 coins. That must be the Gold that’s being referred to in the title! 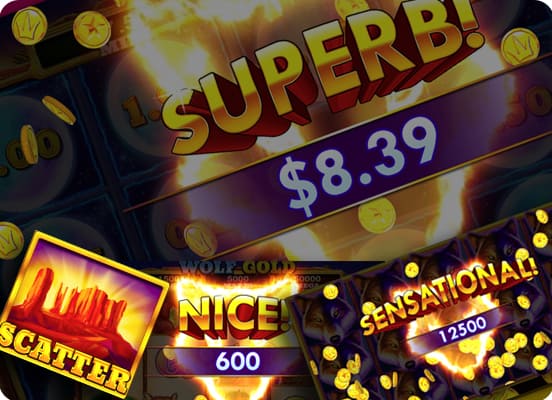 We’ve covered the setting, the features, and how to play Wolf Gold. Like with any other slot, however, there are certain numbers that you’ll need to know. Here are those you likely consider most important.

If you love animals or all things American, you’ll enjoy playing Wolf Gold slot in Mr Green online casino. But this exciting slot, with its fun bonus features that enhance the gameplay, is far from being just another American-themed slot. You’ll come across symbols such as stallions and wolves, which can land some impressive wins when matched. If you enjoy free spins, you’ll find there are lots to enjoy about Wolf Gold, especially if the wolves are howling on your side.