How to play Rise of Olympus

Rise of Olympus is unlike most online slots you’ll see. Rather than the typical 5 x 3 slot, there are 5 rows and 5 columns of symbols. In order to hit a winning combination, you’ll need to land at least 3 symbols in one group. When you win, the winning symbols are replaced by new ones. Your multiplier (on the left-hand side of the screen) increases each time this happens, although the multiplier meter resets between wins.

There are 3 high-value symbols, which take the form of the three Greek Gods: Hades, Zeus, and Poseidon. Each pays 10x for 5 in a single payline. But as a little extra, if you spin in total 5 gods, in any combination possible, you receive 5x your bet.

The Wilds, however, are the biggest premium symbol by far, paying 50x for 5 in one payline.

Each symbol in the dynamic paytable connects to the game’s theme, with lower-paying symbols represented by Zeus’ lightning bolt, Poseidon’s trident, and Hades’ helmet. 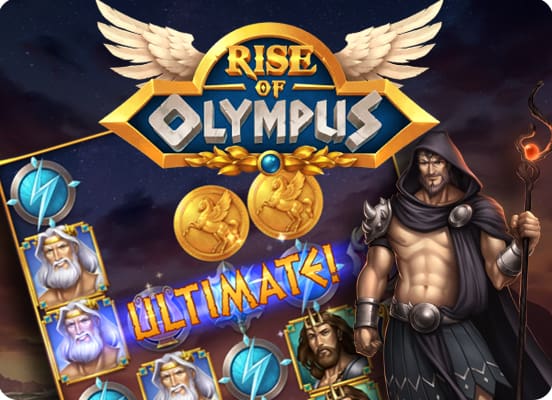 The graphics in Rise of Olympus are unique from other slots themed around Greek mythology. Rather than classical style illustration, the gods are shown in contemporary style, more akin to the superheroes we are used to seeing on the silver screen. The background changes to serve whichever God is stood to the right of the grid. If it’s Hades, the background shows a fiery underworld, you’ll go deep in the ocean with Poseidon, or you’ll be high in the sky with Zeus.

The sound contributes to the theme every bit as much as the visuals. The pounding soundtrack is perfect for creating suspense, and the sound effects play each time you activate a feature. 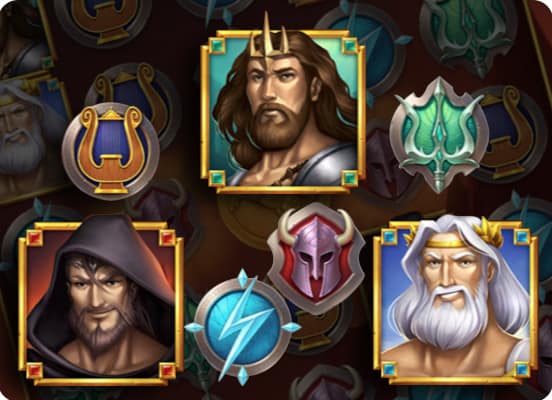 The Golden Horse represents the Wild, which can substitute for any other symbol in the game. It can form a winning combination either when as a substitution or on its own. The latter is how you achieve the highest symbol pay out. 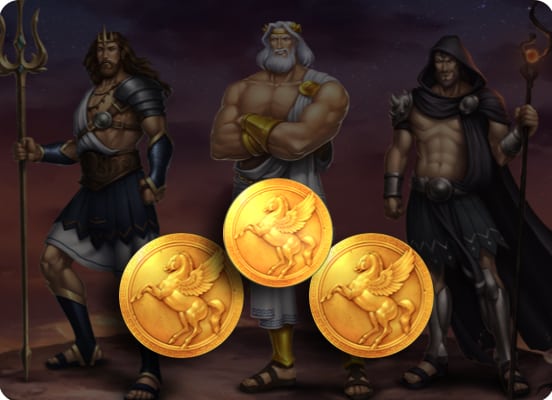 Rise of Olympus includes three bonus features where the gods will show you their superhero powers.

The Hand of God randomly activates after a non-winning spin, with the three gods showing their very own abilities. After each trigger the active god will be changed. You can see who is next in line as the god will be waiting to unleash its powers on the right-hand side of the reel.

Here’s what to expect to happen from each of the Gods' unique superpowers:

- Poseidon: up to two additional wilds appear on the reels

- Hades: a set of symbols is replaced by another

The golden metre on the left of the reels features three sections that are filled when you land combinations of god symbols. Once full, you’ll be rewarded with a free spin where the three gods will trigger their unique features, basically, a free spin with all three Hand of God features combined.

How do you fill the meter? If you get three gods (3 of a kind), you’ll fill a single section, four gods (4 of a kind) will fill two sections, and five of a kind fills all three sections.

Experience the real power of Olympus once you’ve cleared all sets of reels, except wilds. When you achieve this, you will activate the free spins rounds, during which you can select one of the following options:

- Zeus: Eight Free Spins with a chance to recharge for two more

- Poseidon: Five Free Spins with a chance to recharge for three more

- Hades: Four Free Spins with a chance to recharge for four more

In addition, the god’s superpower will be activated on each spin without a win and the multiplier will continue to increase until it reaches the maximum of 20x. 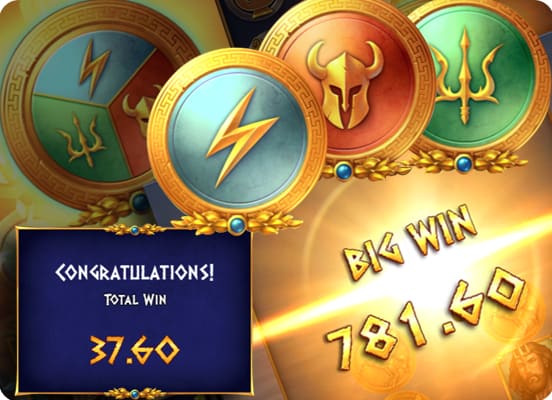 Play’n Go released Rise of Olympus in 2018 as a unique addition to the range of Greek-themed slots available. Available on a range of devices, you can enjoy this slot on your laptop or on your smartphone or tablet when on the go. Of course, the numbers are as important as anything else when it comes to slot play. Here are those you’ll want to take note of.

Play’n GO knows what they’re doing when it comes to creating an unexpected and unusual game, and it has succeeded yet again with Rise of the Olympus. The gameplay features some real energy, with a rare match-three engine to provide wins both horizontally and vertically, with symbols contributing to multiple win lines.

The developer has used this game mechanism before, so it made sense to respin to it with such a popular theme. Speaking of the game mechanism, it doesn’t take long at all to get used to, despite the apparent complexity. Rise of Olympus is definitely worth trying out. Give it a spin today at Mr Green casino.