How to play Pyramid: Quest for Immortality slot

Pyramid: Quest for Immortality video slot is an Egyptian themed slot that features 5 reels and 720 ways to win. Ra and Anubis stand on either side of the reels, waiting to award you with Wild symbols and multipliers.

The soundtrack is mystic and suspenseful, keeping you on the edge of your seat as you watch the symbols fall down. The symbols, in the form of giant stone blocks, fall into position with a rocky rumble as they land. The basic symbols 10, J, Q, K and A are painted on the ancient blocks. The high paying symbols of this casino game are Tutankamun, Cleopatra, the scarab, the eagle, and the cobra holding the crook and flail.

You can play Pyramid: Quest for Immortality for free with play credits, or play with real money, where you can set your wager as low as €0.10, or if you want to win riches fit for a pharaoh, the highest possible wager is €200. 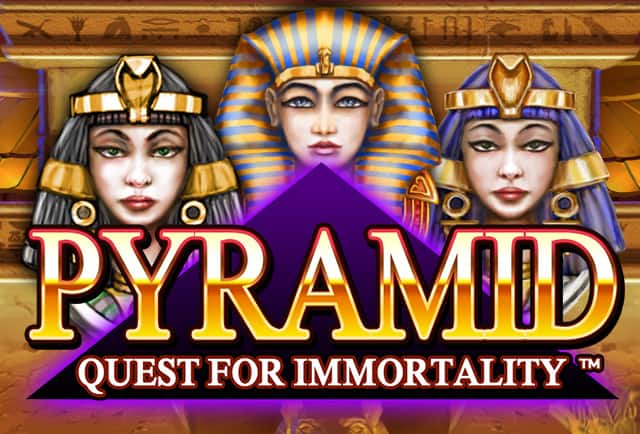 The layout is quite different from your typical slot design, in that it takes the form of a pyramid. The outer reels have 3 rows, with the middle reel having 5 rows. Thanks to this layout there are 720 ways to win the ancient treasures. The symbols follow the traditional slot design with 10 – Ace symbols, which helps to keep things nice and simple. The ‘Wild Generation’ can appear on the top of reels 2, 3 and 4 and substitutes for all symbols.

The game has the Avalanche feature, where the symbols fall into position in the reels, instead of spinning. Symbols in winning combinations explode and disappear, leaving space for a second Avalanche of symbols, ultimately giving you a chance of bigger wins. The Avalanches continue until there are no more wins, combine this with the Avalanche Multiplier, which increases by 1 with every 3 successive Avalanches and you are well on your way to the riches of Ramesses II. And if that wasn't enough, you also have Wild symbols that regenerate if they are part of a winning combination, which can lead to more winning combinations. 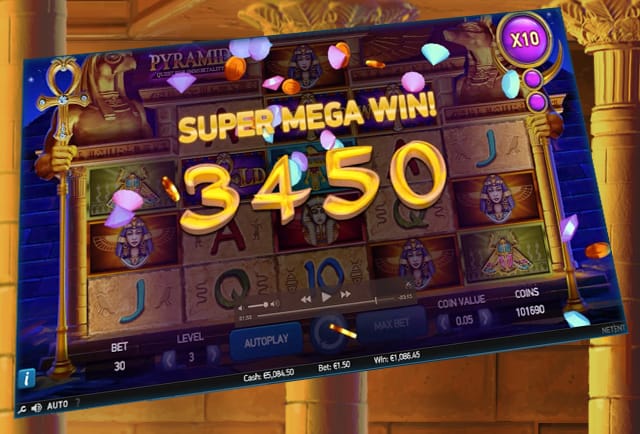 A symbol that lands on the top of reels 2, 3 or 4 and is part of a winning combination, turns into a Wild symbol for the next Avalanche. Wild symbols that are situated on the top of reels 2, 3 or 4 and that are involved in a winning combination will not disappear but will remain to be Wilds until they either fall further down in the reel, or there are no more wins in that series of Avalanches.

Since every win triggers a new avalanche and winning symbols at the very top of the three reels in the middle turn into new wilds, it's not impossible to trigger multiple Avalanches allowing for the multiplier to climb higher and higher. 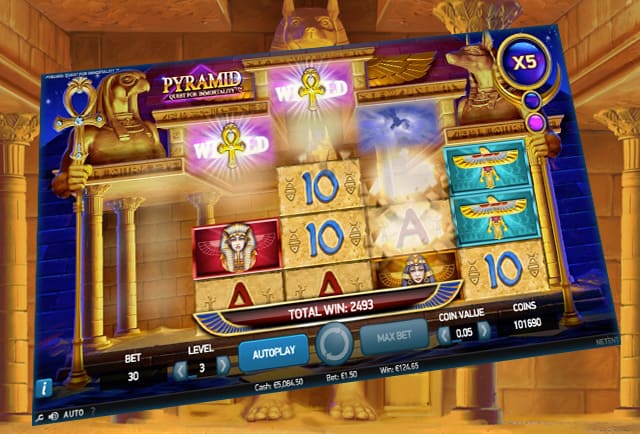 Pyramid: Quest for Immortality might surprise you, due to its lack of Free Spins. But with the combination of the Avalanche feature, Wild Generation and Avalanche Multiplier there are plenty of big wins to be had and more than enough excitement and entertainment to be had in the game.

Instead of spinning, the symbols fall into place in the reels, and symbols in winning combinations explode and disappear, leaving space for a second Avalanche of symbols. After 3 successive Avalanches, the multiplier increases by one, up to a maximum of x10. The multiplier remains at the maximum for the subsequent Avalanches until there are no more wins.

Mechanics of Pyramid: Quest for Immortality

Pyramid: Quest for Immortality, by NetEnt, was released in October 2015. The game is available in ‘play for free’ mode or ‘real money play’ across desktop, tablet, mobile and app platforms.

Pyramid: Quest for Immortality is filled to the brim with the mysticism that surrounds the myths of ancient Egypt. The 720 ways to win and the Wild Generation feature, together with the Avalanches and Multiplier more than make up for the lack of Free Spins. Even without bonus features, this slot still provides serious entertainment and big wins to the player. Pyramid: Quest for Immortality video slot is well worth trying out, either in “Free Play” mode or for real money.

Take part of your welcome offer