Blackjack has long been a popular casino game based on its entertainment value and its brilliant simplicity. Although the basic concept is an easy one to get to grips with, there are a few variants of Blackjack all offering players something a little bit different.

Sometimes these variants can change the house edge. This does not necessarily mean you have to change your own strategy when playing but you could be better off with some small strategic changes. Here we take a look at the different types of Blackjack hands you can play at Mr Green right now.

Standard Blackjack, unsurprisingly, is the most common form of the game you will find available to play online and you can of course play this at Mr Green.

The basic rules of standard Blackjack are common, making them pretty much the same wherever you play. A few things may change from table to table, including exactly at which point a dealer must stand and hit or which cards can be ‘doubled down’ on, but these are always explained before you play.

You may find other minor changes from time to time but ultimately its about knowing the basics of blackjack before you get started, so before you choose your table and play for real cash you should understand this:

Double Exposure Blackjack, known in some territories simply as a ‘two-card game’, is a fast-past, entertaining version of standard Blackjack with the main difference being that both of the dealer’s cards are shown before the player has to make any choices.

On the face of it, this is a big advantage for the player since the payout for most combinations is generally the same as in standard blackjack. However, this is all mitigated by the fact that the dealer wins on every hand that is tied unless you have a Blackjack of course. Winnings on 21 also come with a lower payout than in the standard game so players need to take this into consideration before plumping for this option.

With ties meaning defeat for the player, basic strategies have to be different in Double Exposure Blackjack. So despite some people thinking that seeing both the dealer’s cards gives some security, in fact, this is a risky game aimed more at those who like to take a chance.

Pontoon is a form of Blackjack that is exciting and features stark differences from the standard version. The name may be familiar to many players who grew up playing variants of ‘twenty-one’ with the family.

With pontoon Blackjack, you aren’t able to stand on anything lower than 14. You are however allowed to double your stake on every extra card that you ‘hit’. In the old days, people playing at home would often use to ‘stick’ instead of to ‘stand’ and they would say ‘twist’ rather than ‘hit’.

Pontoon also allows players to create a hand with five cards that beats any other hand, except for those, of course, consisting of only two cards and totalling 21 – i.e. ‘Blackjack’.

So, if you have a low total (and you can’t stand on less than 14 anyway) and you’re brave enough to keep hitting, you could win regardless of your total overall. It’s that difference right there that makes pontoon so popular.

For those who have played Blackjack in various territories around the world or indeed online, Pontoon is similar in nature to ‘Spanish 21’ so if you’re familiar with that, you get the idea.

Essentially this game is just like standard Blackjack, with all the basic rules above still in place. But there is one small difference in this game that can be very crucial tactically and it’s something you should get to grips with very early if you’re going to play.

Playing Blackjack Surrender means you have the option of giving up or ‘surrendering’ your starting hand and getting half of your original stake back.

Used rashly, this can simply be seen as giving money away without really playing the game. However, used wisely on a mathematically poor starting hand this strategy can save you a lot of money in the long run. That is the main reason why this form of the game remains very popular with those who see themselves as strategists and thinkers, not simply “gamblers”.

The rule is also known in some places as ‘late surrender’ and its popularity comes from those players who see their dealer’s upcard being a 10-value card or an Ace. Often those who are used to playing Poker particularly like this option, as they realise it’s sometimes best to give in – essentially to ‘fold’- rather than to belligerently carry on betting and hope for the best.

Surrendering will only be given as an option after the dealer has checked for Blackjack of course, as this always remains the name of the game and supersedes anything else!

Whatever variant you’ve chosen for your round of blackjack, it’s fair to say that ultimately there is nothing better than making the experience as authentic as possible. This means, really feeling like you’re in an actual casino, where you can take in the brilliant atmosphere as you play.

Mr Green’s live blackjack allows you to grab a slice of the real casino action, no matter where you are. So, if you’re kicking back at home or you’re stuck on a long journey with time to kill, the live tables can temporarily whisk you away and allow you the same thrills as you get being there in person.

The high-definition video means everything is crystal clear as you play, in addition, you are able to hear what’s going on at the table with as a result making for a great atmosphere. Via our chat system, you can even talk to the dealers as you would in a land-based casino, and you can chat with the other players around the table to find out who’s doing well and who’s not.

To give you even more choice, Mr Green offers you two well-known providers for your Live Blackjack experience, with both NetEnt and Evolution Gaming presenting live tables. Each has its differences from the other, but both offer a great live experience and a choice of game variants.

Alongside all his other great offers, Mr Green gives you the chance to play VIP and High Roller Blackjack games. The rules for these games are no different except that they come with higher minimum and maximum bets than the standard offering.

In our VIP and High Roller sections, you can enjoy for example Evolution Gaming Live Blackjack VIP. At this table, the minimum bet size is €100 and the maximum bet is set at €5000. Naturally, the content here is first class and if you consider yourself to be a blackjack whale, this is the place for you!

How to Choose Your Blackjack Variant

How to Choose Your Blackjack Variant

All of these slightly different Blackjack games offer players something a little different, but how do you know which is one is best for you before deciding to bet real cash?

Well, ultimately it comes down to what floats your boat. Do you like to take risks and keep hitting in Pontoon? Do you like to play it safe and take insurance, or perhaps be able to see the dealer’s cards as in Double Exposure? Whatever you’re into, you’ll need a game plan if you want to succeed.

Mr Green has you covered on that score, with our Blackjack strategies available for everyone to take a look at. Once you understand pair splitting, doubling down, insurance and of course the basic odds of the game you can have a better idea of how you’ll play and thus, which Blackjack game you think is best for you. 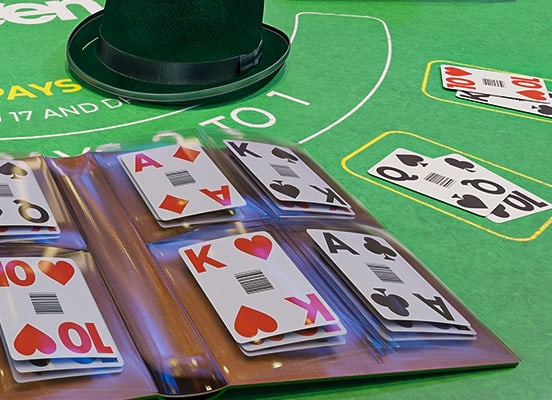