How to play Immortal Romance

Before you assume your role in this sweet yet deadly romance, you'll be asked to decide on your stake. Be warned: there are more cringe-worthy references below.

Your stake is dependent upon the number of coins (1-10) you wish to play per spin. Each coin is valued at £0.60, which equates to £0.60 minimum and £6 maximum per spin.
The story on the reels revolves around the four main characters- Sarah, Michael, Troy, and Amber. The other symbols are the typical playing cards found in the majority of slots. We'll be delving into special symbols shortly.

With regards to patterns, there isn't just one way of winning. While you could win from matching symbols in a straight line, there are other winning scenarios. For example, one of your symbols could lie along the middle on the second from the left and team up with one along the bottom on the far left with one along the top on the middle reel. In fact, there are 243 winning combinations.
In terms of payouts, there are various levels. To achieve the biggest win in the game, you need to secure five Scatter symbols. The second biggest win comes from five Immortal Romance symbols, then five Sarah symbols, five Michaels, five trophies, five Ambers, five Haunted Mansions, five of the candle and book, and finally, five matching playing card symbols.
The Scatter reveals itself in the form of a large golden lion. Just in case you need a little extra help remembering, it says 'Scatter' on it to tip you off. You'll get back your stake if you see two Scatters. You'll see shortly what it means to see three.
On top of the above, Immortal Romance is also featured amongst the most popular video slot games. Get a browse through our page to find other exciting video slots. 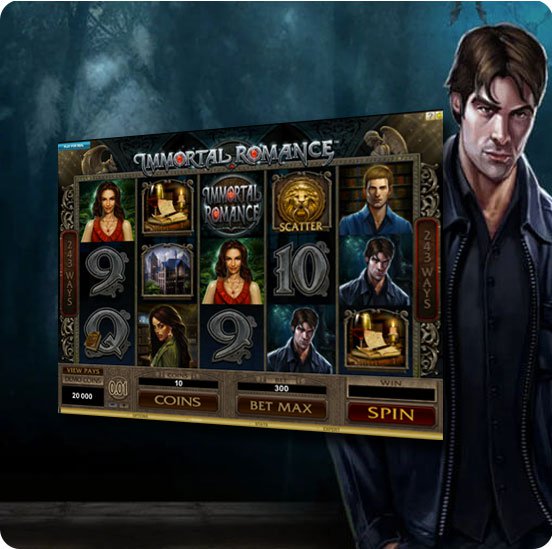 Just to make it nice and clear, the Immortal Romance Wild Symbol is, erm, the Immortal Romance symbol. The joker is the game’s logo and you can swap it out for another symbol to help you win.
You can find it any time and any in place on the reels. There can even be several of them in play simultaneously. Just to reiterate, your winning combinations can either be in a straight line or in zig zag fashion. If you get at least two, you’ve stumbled onto a nice win. 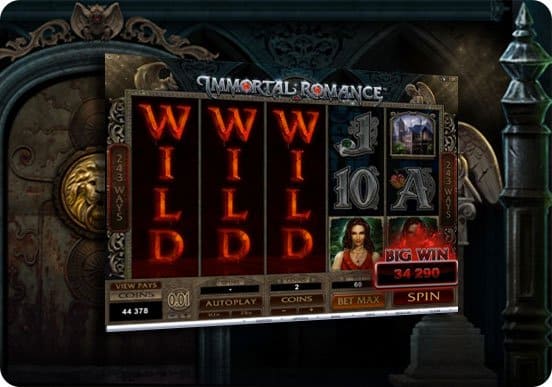 Okay, so we've just hinted that things start to get exciting when you get three Scatters or more. Hopefully, you were paying attention.
Basically, it means that you can get ready for some free spins. I stand corrected: you can get ready for the 'Chamber of Spins' (it's a vampire slot, after all). And adhering to Microgaming's theme, you never just know how many free spins you're going to get. You'll just have to wait to find out all in good time.
You can even choose which character's free spins round to choose from. You'll need to apply some basic maths here, in determining which one to play.
Amber Free Spins Feature- While Amber offers the lowest number of free spins (10), every win comes with a 5x multiplier, so you'll get a nice fat upgrade every time you win.
Michael Free Spins- Michael offers twice as many free spins as Amber (20). After each time you win, you can expect cascading reels (also termed 'rolling reels'). In this scenario, your winning symbols vanish into thin air before being replaced. If you win from the new symbols, all the better. You can continue in this fashion for as long as you win.
Sarah Free Spins- Sarah is the most generous when it comes to the number of free spins (25). Each one of her free spins comes with Wild Vines revealed across the reels, which helps you win.
Troy Free Spins- Troy gives you 15 free spins to play with. There's no definite multiplier here but you do receive one after every time you win. A number of bats are revealed on the reels and that's when you see what multiplier you get. You simply turn one of the symbols over to see the number.
Find here all about our casino bonuses on slots and other casino games!
Oh, and here's another bonus round because, well...just because.
Wild Desire- Where lusty vampires roam, so does a bonus round with a name like Wild Desire.
You never know when it's about to be activated. When it is, you'll be awarded a free re-spin. Before that, you'll also get a random wild wheel. In fact, you may even get two. Very occasionally, it will be five. The actual feature only occurs occasionally. Although, it's great to see it when it happens. 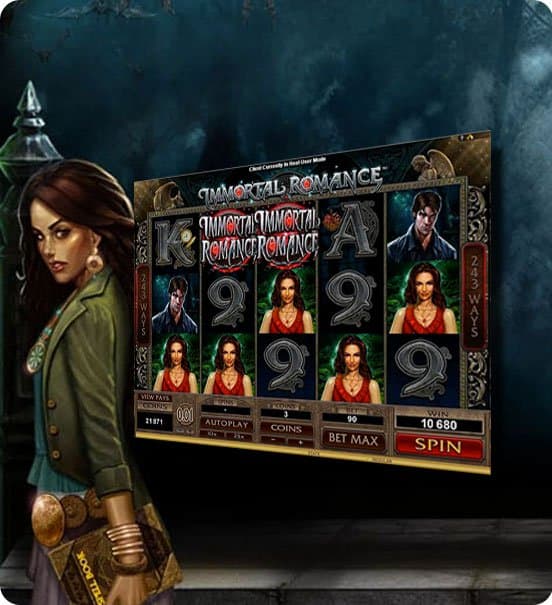 How to Play Immortal Romance Slot?

Immortal Romance is easy to play. First, you’ll need to select your stake, which starts from just 30p per spin. Once your stake is set, just hit spin. They’ll then come to a stop before displaying the result.

What is the Immortal Romance RTP?

Immortal Romance has an RTP of 96%. It is a medium volatility online slot.

Is There A Progressive Jackpot In Immortal Romance?

There is no progressive jackpot in Immortal Romance. However, the max win is 12,000x your stake.

Is there any possibility for immortal Romance free play?

Yes, you can play Immortal Romance for free. However, you will not be able to win real cash. Playing for free is a good way to get a feel for the game before staking your own money.

Do you want to play Immortal Romance on mobile? While it’s been available for some time, it wasn’t until early 2017 that Immortal Romance could be played on all mobile devices. Before that, its availability on mobile was limited to Android, and it even had to be downloaded, which was annoying, to say the least. It’s now available on any device with no download required.

It’s a medium-volatility online slots game so you can expect to win often. Further, if you do manage to trigger the free spins round, you’ll really start to build up your bank.

It would have been impossible for Microgaming to predict that Immortal Romance would go on forever. Of course, we’ve seen countless other slots come along since its inception but most haven’t stuck around. There’s just something about Immortal Romance that has tapped into the heart of thousands of players (not with a steak, I may add- that would be bad!).

We all love a slot game with an intriguing story and who doesn’t love to be entertained? Something tells me the relationship between Mr Green and Immortal romance will continue for a long time yet. And by a long time, I mean forever.