When you’re using the optimal blackjack strategy, basic strategy, the first thing you should always ask yourself in a hand is whether or not you should use surrender. It’s very common that blackjack players wrongly choose not to use the option. This is due to the fact that surrender means giving up the hand, which most people don’t want to as the goal should always be to try and win the hand, isn’t that so?

Actually it isn’t. The goal with basic strategy is to play in a mathematically correct way so that winnings are being maximized and losses minimized. By using the surrender option in a correct way you’re able to minimize your losses over time and will therefore benefit from using it.

In the following article we’ll explain more about what the surrender option is and how it’s used at the table; when it’s mathematically correct for you to use it, as well as how much you’re able to lower the house edge by using it correctly.

How surrender is used

Surrender may not always be available at the table you’re playing at as the rules may vary from one table to another. Should however the option be available, the first decision you should make in a hand is always whether or not you should use it. By using surrender you’ll be giving up your hand and receive half of your stake back. This means that you won’t be able to win the hand, but this will instantly end for you as half of your stake is being returned.

There are two different types of surrender that you may come across, which is late and early surrender. Late surrender is quite an unusual type to stumble upon, but when it is indeed used at the table, it won’t be possible to give up your hand whenever the dealer has been dealt a blackjack. If the dealer’s first card has a value of 10 or is showing an ace, the dealer will have a look at the second card. If it turns out that this card has a value that results in the dealer having a blackjack, the surrender option won’t be available for the hand.

Early surrender is a lot more common to find at the tables, which means that it’s always possible to surrender the hand, no matter what the dealer’s first card is showing. It is however important to be aware that the option must be used the first thing you do in a hand. If you have made any other decision, such as asked for another card, the option won’t be available. 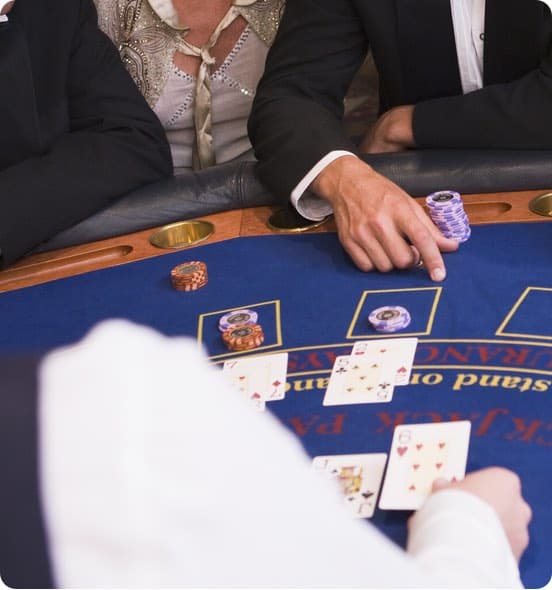 When you should use surrender

When it’s mathematically correct for you to use surrender partially depends on if it’s late or early surrender that’s offered at the table. The number of decks in play and the table rules do however also play an important role. In late surrender it’s possible to reduce the house edge by 0,07% with the use of the optimal strategy, basic strategy.

Please note that the pair 8 – 8 isn’t included in the stated value of 16, but is separated and stated as 8 – 8 in the table below whenever it’s correct to give up such a hand. This is for instance the case when two decks are in play and the table rules are H17, NDAS. Please also note that this is the only time when the table rule of being allowed to double after a split or not has any impact on whether or not a hand should be surrendered.

When early surrender is being offered, this is way better for us players as we’re able to reduce the house edge as much as 0.63%. You’ll find that the number of hands that are mathematically correct to give up are a lot more in early surrender than in late. To illustrate the correct decisions in the best possible way, the table of early surrender below therefore looks different than the one for late surrender above.

Nevertheless you’ll be able to easily find out which hands are mathematically correct to give up when early surrender is being offered at the table. A green column means that the hand should be surrendered no matter what the table rules are, whereas a yellow column means that the hand should only be surrender when the table rule S17 is in play. NDAS stands for “no doubling after split”, which shows that surrender is only correct to use if it’s not allowed to double after a split.

If your starting hand for instance has a value of 5, it’s mathematically correct to surrender this hand when the dealer is showing an ace, no matter how many decks are being used. If you have 8 – 8 and two decks are in play, it’s only correct to surrender the hand against the dealer’s ace if the table rules state that the dealer must hit on soft 17 and no doubling after a split is allowed.

Using surrender in a mathematically correct way is not the variable in basic strategy that will lower the house edge the most, but using it correctly will still be beneficial for you in the long run. The math behind surrender is very simple. If a hand statistically has less than 25% chance of winning, which the hands listed in the above scenarios have, it is simply better to surrender the hand and receive half the stake back instead of playing it.

The option may not always be available, but if it is it’s usually early surrender that is offered. This is the type of surrender that is best for us players as we have the possibility to reduce the house edge by 0.63%. It’s not only the lowering of the house edge that is to your advantage, but your variance will also be evened out. This means that your capital won’t suffer from the same lows and peak at the same highs as if you would be playing every hand, but it will be stabilized. In other words, you won’t experience the same fluxuations in your bankroll, because you’re removing luck out of the equation.