Just like with a holiday or shopping spree, the first step to playing Starburst is to decide on a budget. How many spins you’re going to budget for and that of course includes how much you want to stake per spin.

The first way to adjust your stake is to decide on the coin value. It can be anything between 1 cent and 1 USD and you can adjust it up and down by pressing the green arrows. Once you’ve done that and got to an amount that you’re happy with, it’s time to choose how many active pay-lines you want, which in this game are known as Levels. You can choose between 1-10 and the more Levels you have, the greater your chances of getting a win, though it will also cost you more per spin. Hence the need to budget.

If you’re feeling a bit Gung-Ho you can get down to no-nonsense playing by just pressing the Max Bet button, which will allow you to spin for the highest stake the game allows you to.

Once you’re ready to start spinning, you can do so manually or by pressing the Autoplay Button. At the simplest level, it means you can choose a pre-determined number of spins that the game will play for you. By clicking on Advanced Settings, you can set some parameters that mean the AutoPlay will come to a halt, such as when you win a certain amount of cash on an individual spin. 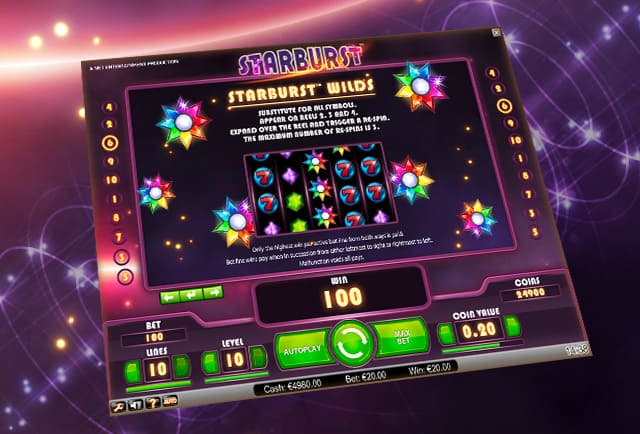 Starburst is a 5x3 reel Slot. Its iconic symbols are the colourful jewels that we also see on mobile and social apps and it’s no exaggeration to say that they’re probably the most easily recognisable symbols of any slot on the market. Well, maybe with the exception of Gonzo from Gonzo’s Quest.

The jewels come in purple, blue, orange, green and yellow and are completed by the Red Seven and the Bar symbol, NetEnt choosing to take a leaf out of the land-based Casino slots with these last two. The BAR symbol is the most valuable, paying out 250 times the value of your bet if you get five of them, 200 if it’s four and 50 if it’s three. The Red Bar symbol is the next most valuable.

Starburst is a bit of a rarity in that it pays both ways. Most slots tend to pay just from left to right but here’s it’s right to left as well. That means that any three symbols in a line in either direction and you’re in business. Each time you secure a win you’ll witness the slot’s famous flashing lights going through all the symbols that made up the win.

Because there are 10 active pay lines and you can secure wins both ways, it’s quite common to get more than one winning combination within the same spin. It’s known as a Combo (or Super Combo or Mega Combo if it involves lots of different winning combinations) and in addition to paying out several times, the game will also display where and how exactly the wins occurred. 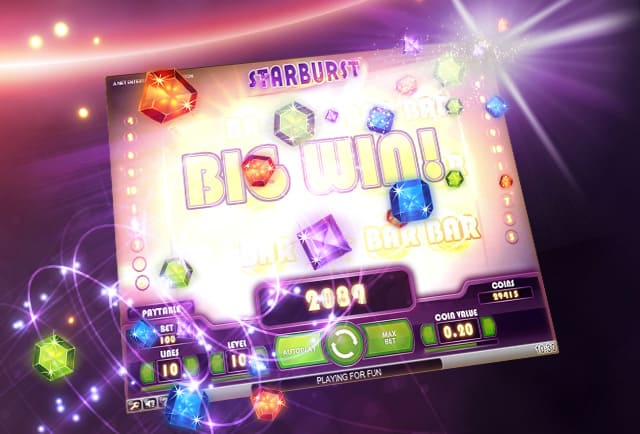 We haven’t mentioned it yet but the time has now come. This symbol a beautiful star with each of its eight segments in a different colour: yellow, green, turquoise, blue, purple, pink, red and orange. All surrounding a stunning white pearl.

But the Starburst Wild has substance in addition to style.

Shall we find out what it does? Let’s. 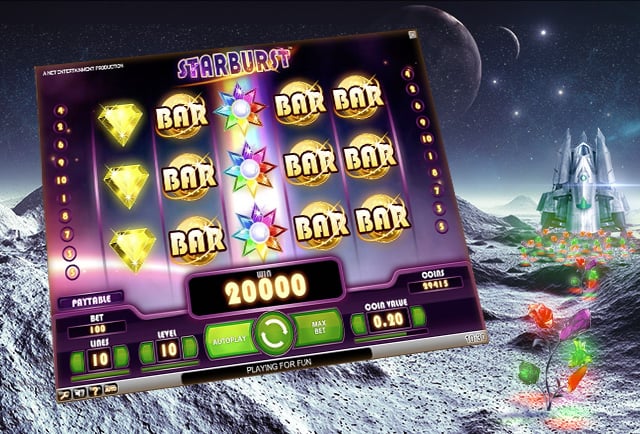 Re-Spin
When the Starburst Wild symbol appears on Reels 2, 3 and 4 it doesn’t just occupy one position on the reel, it occupies the whole of that reel because it always comes stacked.

When it appears, you’ll automatically be granted a Re-Spin. Meaning the stacked Wilds will remain in their original position while you get a Re-Spin. Should you get yet another Starburst Wild symbol, you’ll be awarded one more Re-Spin; you can get a maximum of three in a row.

But, of course, the Wild symbol isn’t just about the Re-Spin. The stacked symbols obviously act as Wilds and will substitute for any other symbols to help you form winning combinations.

With its big symbols and simple playability, it’s perfect for playing on mobile devices so wherever you are, Starburst is, too at Mr Green. If you’d rather try out the merchandise before getting your wallet out, so to speak, you can play Starburst in Free Play mode.

Starburst is considered a low volatility slot. That’s because you’ll secure lots of regular wins as you play but in the absence of a Progressive Jackpot or a long free spins round, huge pay-outs coming from just the one spin are pretty rare.

You’ll find plenty of other slots here at Mr Green Casino with more bonus rounds, more exciting features and all in all, just a heck of a lot more going on in the reels.

But ever since it was launched, there’s a somewhat inexplicable quality about Starburst that just makes players love it. The jewel symbols are a part of that and there’s something exciting about seeing that Starburst symbol appear even though you’ve seen it plenty of times before.

But it’s not worth obsessing too much about the secrets of Starburst’s success. Let’s just appreciate it for what it is.