How to get started with Reactoonz

Reactoonz is a cascading 7×7 (reels/rows) grid and cluster pays slot. Slots come in a variety of maximum payouts, and this one boasts a tremendous 91 406 coins! It has high volatility, however, so you may have to wait some time before getting a big win.

Since there are no paylines to adjust, there is no need to set it at your desired level. The first thing to then do, is decide on how much you want to wager per given round. There is a broad range of wager amounts available. You can scroll through them from beneath the grid by pressing the ‘+’ or ‘-‘ buttons or on the value directly. The lowest wager amount allowed is $0.20, and the highest is $100.

When you’re ready to get the ball rolling, click on the big green button at the bottom right to start the round. Remember that you can adjust your wager only after the round has ended.

The slot also comes with an ‘AUTO PLAY’ ability, which you can kickstart by clicking on the yellow button to the right of the big green button. Select the number of auto spins you want, ranging from 10 to 100.

The value of cluster payouts can all be found in the slot’s paytable. 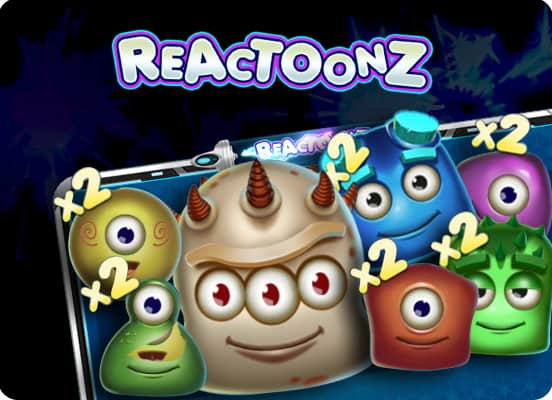 Symbols to watch out for

The parallel universe of Reactoonz uses standard artwork with symbols divided into 4 higher-paying (two-eyed aliens) and 4 lower-paying (one-eyed aliens). These aliens are cartoonish, and so it comes as no surprise then that they are very amusing. To further support the atmosphere, the sound effects blend futuristic elements, including music, with other random sounds that might include a snoring ‘Gargantoon,’ or high-pitched talking alien. 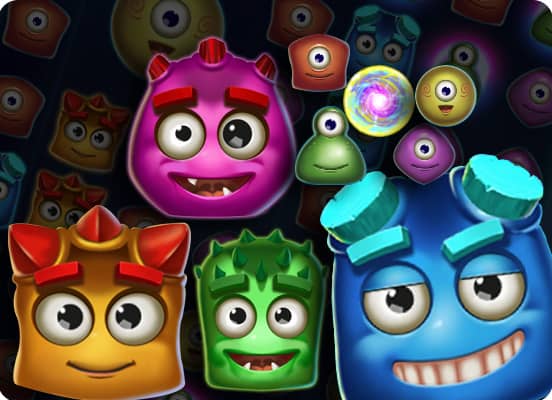 Wilds may appear as part of the Quantum Leap, Gargantoon and Giantoonz features and substitute for any of the other symbols. Unlike most other slots, wilds don’t just appear on the reels of Reactoonz, but they are created. During each spin, one symbol is fluctuating. If a winning combination is formed with this symbol, it will leave 2 wild symbols behind when the cluster disappears.

The other way wilds may appear is during the Gargantoon feature, about which you will soon read more. 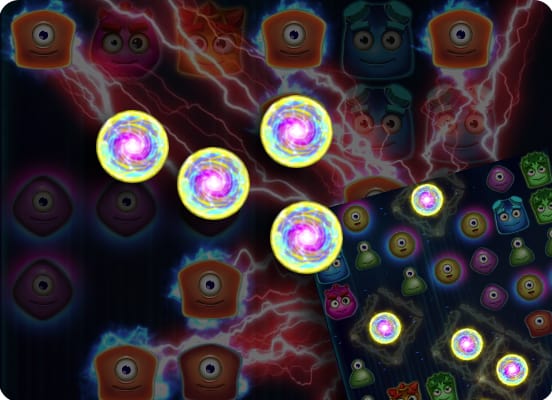 Part of the excitement of Reactoonz comes from its unusual features:

Instead of spinning reels with paylines, symbols drop down (cascade) into place. Wins are created with 5 or more adjacent and identical symbols, horizontally or vertically touching. These winning groups are called ‘clusters,’ and they explode, leaving spaces that are filled by more cascading symbols. The explosion of winning clusters will continue as part of the game round, for free, until no new winning clusters form.

To the left of the reels, you’ll find what is referred to as a ‘Quantum Leap charge meter.’ From within each game round of cascading symbols, winning clusters are used to charge the meter by 1. Fully charging the meter will add 1 of 5 possible Quantum Features to a queue triggered at the end of a round:

Demolition: All matching symbols and one-eyed aliens are destroyed.

Incision: A wild symbol is surgically implanted in the centre while creating two diagonal lines of an identical symbol that runs the length of the grid.

Gargantoon: Charging all 5 levels of the meter adds the Gargantoon Feature to the queue, which randomly places a 3×3 sized wild to the grid. When the cascades are completed, it transforms into a 2×2 wild symbol and ends off as 9 (1×1) wild symbols.

The Gargantoon symbol may also randomly appear on a losing round to deposit anywhere from 4 to 8 wild symbols anywhere on the grid. It’s definitely fun to see more wilds added to the playing area.

A square-shaped pattern of 4 regular, identical symbols will form a ‘Giantoonz.’ As a bonus, wins containing a Giantoonz receive a 2x multiplier. 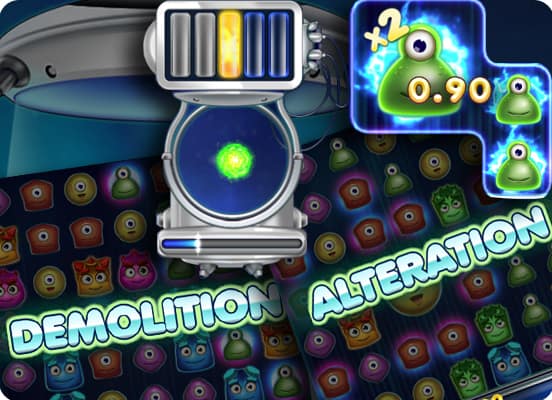 If you like Reactoonz, check out the following slots :

Mr Green has put together the key information and stats for Reactoonz slot:

Reactoonz is a weird and wacky slot based on an electrifying alien theme. The animated artwork and space-age sounds are sure to put a smile on your face. Together with the entertaining features and potential 91,406 coins payout, the end product is a delightful and engaging slot that’s sure to be a classic.

A close encounter of the strange kind, the slot Reactoonz is available at Mr Green online casino today on your desktop, mobile or tablet!

Join and Play for real
Log In JOIN
This website uses cookies to ensure we can provide the best experience for our players. Learn More
Got It!