When Canadian blackjack players use the optimal strategy, also called the basic strategy, the first thing they need to decide is whether to embrace the surrender strategy or not. Many players are automatically opposed to this strategy. This is hardly surprising since players usually aim to win a hand instead of surrendering it. The blackjack game is complex and there are cases when the surrender strategy emerges as the mathematically correct option among far less than ideal alternatives.

In order to understand why this is sometimes the case, we need to focus on the main purpose of the basic blackjack strategy: playing in order to maximize profits and minimize potential losses.

The aim of this article is to facilitate your understanding of the surrender strategy and if applied correctly, how this approach can help you benefit from it financially by minimizing your potential losses. We will guide you step by step and explain what this play option means and under what circumstances it should be used in order to reduce the dealer’s edge over you as the player.

The surrender option is the basic strategy’s starting point

Choosing the surrender strategy essentially means the following for you as the player:

As far as you are concerned, the game will end immediately once you choose the surrender option and receive half of your stake back. While these conditions may initially seem harsh and unattractive, there are circumstances when the surrender strategy is the mathematically optimal choice.

Early surrender is by far the most common type. As the name implies, it will take place at the very beginning of the game. The rule is that choosing surrender must be the first thing that the player decides with his or her hand. This means that the option will no longer be available once the player decides to move ahead and take an additional card. The advantage of early surrender is that it is normally available irrespective of the dealer’s first card.

By contrast, late surrender is much less common at the blackjack tables. When available, this alternative option cannot be applied in a situation where the dealer has blackjack.

When is surrender the optimal choice?

So when is the surrender option the optimal choice from a mathematical point of view? The basic rule is quite straightforward. If you have a poor hand with only a 25 percent chance of winning, you would be better off choosing to surrender and securing half of your original stake back.

Generally speaking, early surrender is more common and a more attractive option than late surrender. Why is this the case? We will explain below by looking closer at both surrender options.

Choosing a late surrender will only reduce the dealer’s edge by 0.07 percent. It can nevertheless be a mathematically correct choice in some situations. You can see in the table below when it is a good decision to apply late surrender when the option is available.

Let us illustrate it with an example where only one deck of cards is used and rules that the dealer must hit on soft 17. In such a scenario, you should only surrender your hand with the value 16. It is further the mathematically correct decision when the dealer’s card is either a ten or an ace. It is important to note that pair 8 – 8 is not included in the value 16. Instead, 8 – 8 will be registered separately when it is correct to surrender the hand. This is the case when two card decks; table rules H17 and NDAS (meaning no doubling after split) are applied.

It is also important to note that this is the only situation where the table rule dealing with doubling or not doubling after the split will impact the decision to choose the surrender strategy or not. From a mathematical point of view, surrendering this hand will only be optimal when this option is not available. You can practice the surrender strategy in our online casino.

The table below offers an overview of when and with what hands it is the right decision to choose early surrender when the option is available at the table.

Let us illustrate this with a concrete example. You have an initial hand with the value five and the dealer has an ace. In such a scenario, the right decision is to surrender regardless of how many card decks are used at the table.

In the special case of an 8 – 8 hand and two card decks used at the table, then you should only surrender your hand if the dealer has an ace, must hit on soft 17 and the applied rules do not allow doubling after a split.

The surrender strategy means that the player receives half of the original stake back in return for giving up the hand. While this may not sound attractive, sometimes the alternatives could be even worse. The general rule is simple: you should surrender all hands that have only a 25 percent or less chance of winning. The surrender option can further be used to stabilize your stakes and reduce your long-term losses. You can try the surrender option at our live blackjack casino. 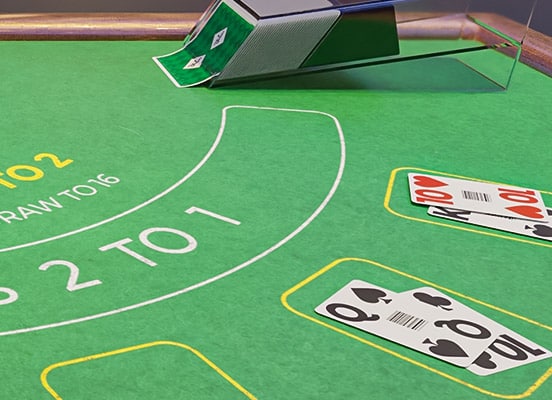